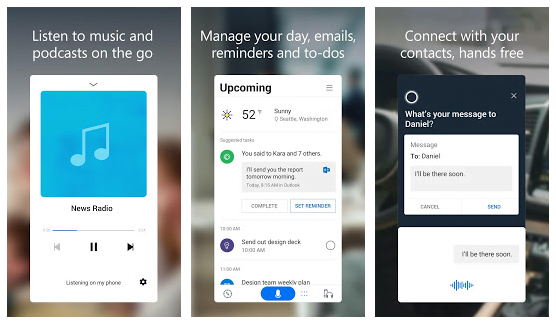 Are you looking for the best apps like Siri for Android phones to download? In this post, you are going to find 10 best alternatives to Siri mobile app for your Android phone.

An Assistant app is a virtual entity that helps you with activities on your phone like making plans, setting your calendar, timing your alarm and so on, all by speaking to it and it would reply with a voice of its own. The most popular assistant that does this mostly is Siri, and Siri is only available for iOS users.

Android users or most Android users don’t get to have and use this opportunity. So, most companies sort out the idea to create apps that would let you have an assistant on your Android devices so they can use the alternatives as well. Are there any apps like Siri for Android? Yes, below I will list the best talking apps like Siri you can search and download from PlayStore.

Cortana is an alternative to Siri. It is a very reliable and useful assistant created by Microsoft. This comes with sensitive features without settings, like reminding and taking your permission to a missed message, call, game resumption, app update and more. You can use it not for just your phone and for your Windows PC also, available on Android. This app will conveniently help you with ease as to sending your mail, checking time for movies and more.

This is one of the top free apps you would likely be able to get on Android because it was made by Google. This is a very sophisticated assistant that lets you be accessible to it much like Siri. It does a lot of things more than some other assistants as it even integrates with some of the smart homes out there that are linked to Philips Hue lights. This app remains top notch at its prime because it updates almost every time by its makers Google which only makes it efficient.

This is another quality app like Siri and Google available on Android. Amazon Alexa was created to be effective and smart unfortunately it does not get easy to use as it requires an Amazon Echo device to be able to activate it. And like Google Assistant, it is installable and useable for smart homes as well. You can even use this app to order food while not doing anything than just speaking to it.

Robin is among the apps like Siri for Android on this article that you can get on PlayStore. This is another amazing great app that comes with a lot of features but it also supports the basics like making out calls and sending out messages and responds to funny gestures. But other amazing features that assistant comes with this app is finding out about parking spaces in your vicinity. It also alerts you about traffic, informs you about the increase or decrease in gas prices, and knowing your location navigation and more.

Most of all these assistant apps come with their own different rather than similar features. Hound comes along with more advanced features unlike the rest of the Siri app alternatives. Some of the features include a mortgage calculator, also integrated support for booking hotels and it open music search for you. This mobile app is very easy to access on Android.

This is another awesome app with other features that are not so similar to the other assistant apps. Though, it can do basic things too but still has features that differ from others. This app is available for free on Google PlayStore. Lyra Virtual Assistant comes with features like searching for things on YouTube, telling you jokes, looking for directions, including having a diary.

Bixby is very interesting and another sophisticated app like Siri but unfortunately it is only available and works for Samsung users only. With features workable for only Samsung devices, Bixby is a great assistant that also supports smart home tech as far as it is connected with Samsungs proprietary hub. It also has amazing features and basic ones as I have listed before.

Laura is also another basic assistant that features like setting an alarm, making calls, sending messages telling a joke and the rest. Easy to get on PlayStore. This app has a feature that only works when you say something certain like keywords or phrases. One of the best features is that it is a great reminder of things given at a certain time.

Among the best assistant apps like Siri, Relplika enables you to make plans with your calendar or set an alarm.

It can find things for you by tracing the location of the certain thing using the date and time and it is available on PlayStore.

This is another alternative to Siri that does every other basic thing you expect it to do. It can help you with making phone calls, receiving messages and setting alarms. The app is easy to get on PlayStore. One of the best features this app has is to record and know your exact voice and yours alone in case someone else uses your device and tries to activate with your permission.

There are a lot of assistant apps like Siri with amazing different qualities that you can use to as one of the alternative apps. This enables you to even know the features as to which app is favourable to your preference and these apps are advanced apps as they not only make basic things for you but also comprehends what you do, say, and think and feel and copes with those things in order to help you better.