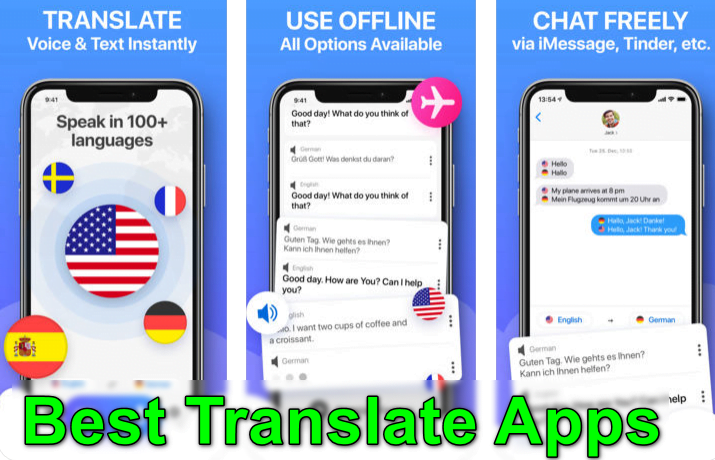 Do you travel a lot to other countries but you don’t understand the language they speak fluently or at all? Do not worry there are apps created to enable you to learn any language. So, I will list 10 of the best translate apps that you can use easily on your either for your Andriod or iOS devices.

Translate me is one of the best translate apps for iOS devices. Also, it is a simple yet powerful tool for translating, text and speech. You can also use this app as a real-time conversation translation. The tool will help students, travelers, and tourists especially, as it will enable them to learn languages.

This is another app you can use for iOS devices as well. With this app, you can travel around the world knowing you can easily communicate with citizens of any country in their language. Using this tool, you can also learn things like new phrases and listen to correct pronunciation.

This is also part of the best translate apps that you can use on your Android devices and it is free for text and voice. The app provides you with the power to translate in more than 100 languages. The app will display your translation and allow you to copy and paste it wherever you like.

This is one of the apps brought to by La Clave Ganadora SL and it is a perfect tool to translate languages online. Also, the app has a quality interface that is stylish yet simple to use. Its translation is done instantly as you use it, the tool is completely free and you are allowed to copy the translated text just using a button. The app has about 90 languages and you can also do translation using your voice on your Android devices.

Another app that is part of the best translation apps is Translate All and it was created by the Translator lab. Also, it is a complete speech text translator that can translate more than 60 languages and you can use this app for business, travel and for education on your Android devices.

This is another one in the list of the best translate apps that you can use quite well. The app is for language translation and it can translate any language you want. It has a simple user interface and can listen to translated texts and sentences in Japanese and even the Chinese language. Also, the app can help students, travelers, and tourists to learn other languages on their Android devices.

This app helps you if you are weak in some parts of the Hindi or English languages. And it also helps you to learn languages you do not understand on your Android devices. Also, the app has features of voice input that can translate words and phrases.

This is the last app in this article of the best translate apps that also provides you with a lot on your Android or iOS device. It has features of voice translation and you also have the advantage of a split-screen mode for two candidates who are having a bilingual conversation. The app has a feature of phrasebooks for verified translation and pronunciation guides. And this helps you to learn all the important phrases in foreign languages whenever you travel.

These are the Best Translate apps you can use for your Android or iOS devices which will give you the power to translate any two languages. Select and download any of the apps in this article and return with feedback.