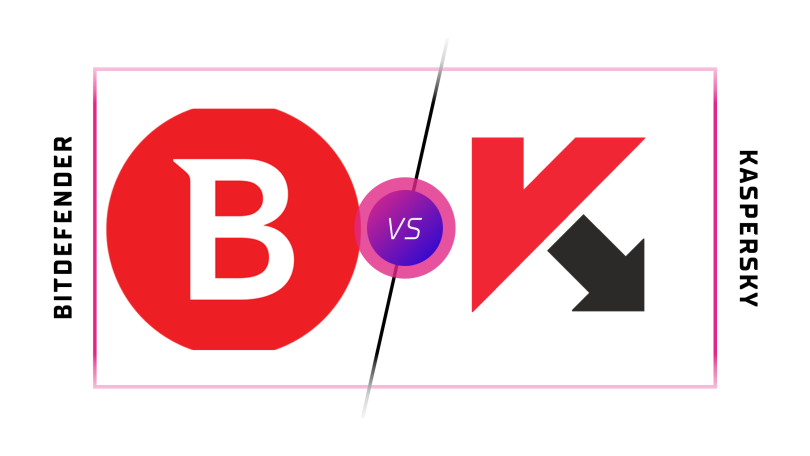 With increase in technological advancement, it is very obvious that many individuals save their most important files in the computers and on the internet. The loss or damage to such data can be very devastating. This informs the reasons why every computer system must have a dedicated and powerful antivirus software to snuff out the danger of data loss and malware invasion.
Bitdefender and Kaspersky are known worldwide as top antivirus softwares. They occupy large shares of the market and they offer a strict protection against malwares and viruses. Most users are usually turned in between these two top antivirus software. They are confused on which one to go for, which one is better and which one suits their co!outer needs.
In this article, we shall undertake an indepth analysis of the two softwares to ascertain which of them is the best. The comparison will analyse the pros and the cons of the two antivirus softwares.

Bitdefender vs Kaspersky: overview and comparison

All of the key features of bitdefender can be assessed in the free trial version which lasts for 30-days. When placed side-by-side with other top products, bitdefender scores the highest in AV-TEST. It has a multi platform system which allows the installation and use of the software on many operating systems. It has a password manager which protects private data and secures against data and identity theft.
In addition to this, bitdefender gives users the room for users to browse the internet safely at a very cheap rate via the SafePay browsing option.
Bitdefender is very simple and easy to install. The user interface is quite simplified that novice can easily navigate the software with minimum challenge. In addition to these, Bitdefender also offers a stable and supportive customer care service.

The major lowdown in Bitdefender is that the parental control feature is not available in the basic package.

Just like bitdefender, Kaspersky offers a highly efficient and free trial version. The duration for this free version is just 30 days after which users are will choose either to pay for the premium version or not. Kaspersky is user friendly. The user interface e is very simple and straightforward and can be customized with ease. It offers a strong malwares and virus protection for the computers. The settings and other functionalities can easily be customized to fit the needs of the users.

Kaspersky has few Cons. One of them is the complex structure of the user interface. It is not simplified when compared to that of the bitdefender.
Also, Kaspersky does not have the password manager – an all important tool for protecting private data and identity.

Hackers are working round the clock to bring up new ways in Identity and password theft. New malware’s are created in quantums. The cyberspace is dominated by surging viruses and malwares. To negate this, antivirus softwares should be able to snuff out both known and unknown malware. In addition to this, the antivirus should be precise enough to detect and block zero-day malwares.
Bitdefender and Kaspersky are both excellent in protecting the system against known and unknown threats. Which of them performs better?
To ascertain which of them is better in system protection, we shall analyse the AV-TEST result and AV-comparatives results.

The January and february AV-TEST results for 5,000 known viruses and 200 zero-day viruses on Bitdefender shows that bitdefender scores 400% in detecting both the known and the zero-day malwares.
This underlines the fact that bidptdefeder is very effective and consistent in system protection. The test was carried out on websites based on the usability, repair and protection. This excelket performance earned bitdefender the Gold award for system protection.

Meanwhile, Kaspersky scored just 99% on detection rate for zero-day viruses. Kaspersky is rated low on the AV-TEST. Aside from that, Kaspersky offers other system protection features such as the two-way firewall, online banking security, identity theft protection, parental control, etc.

The installation procedures involved in the two software’s are highly simplified. It takes about 5 minutes for the installation to be completed. The softwares will brim with life and starts working after payment is made by the user. The two softwares allows users to secure their USB ports against virus attacks by making use of rescue disks to download and burn the tools into USB ports.

To checkmate how each of the two softwares affects system performance, we decided to undertake an OpenOffice benchmark test. The benchmark test is used to check how fast a system works when running the antivirus softwares. To ascertain this, the benchmark OpenOffice was made to check and connect with 20,000 names and 20,000 addresses.
Bitdefender and kaspersky all performed very well on this test. They did not slow down the system.
On a shstem running Bitdefender, the openoffice benchmark completed the scan in 7 minutes and 48 seconds.
On the other hand, a system running Kaspersky completed the same scan in 8 minutes and 18 seconds.

On the whole, bitdefender performed better in this regards completing the scan within the shortest possible time.

Bitdefender vs Kaspersky: Comparison of the prices

We shall now analyse which of the two software’s is more pocket friendly.

Bitdefender has 3 packages – the basic antivirus, the Total security and the internet security suites.
The cost of getting the basic security for one year is $39.98 and it can work in up to 3 devices.
The total security package cost $40.00 for one year and can work on up to 5 different devices.
The Internet security package cost is $35.00 for one year and it can work on up to 3 different devices.
Bitdefender security suites can be described as affordable and pocket friendly as customers derive massive benefits from it.

The antivirus basic package of Kaspersky is billed $29.00 for one year. It works perfectly on up to 3 devices. Users are billed $49.99 to use the total security package for one year and it can work perfectly on 5 devices. As for the internet security, the yearly billing cost is $39.99 and it is designed to work on 3 devices.

On the whole, both the bitdefender and Kaspersky are very affordable and users derive maximum value for their money.

Wrapping up: bitdefender vs Kaspersky 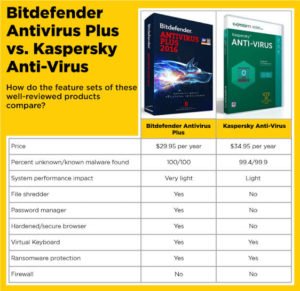 In terms of pricing, the two softwares are at par. Aside from the pricing, it is very glaring that the Bitdefender antivirus ranks higher than Kaspersky. Hence, we recommend users to go for Bitdefender!