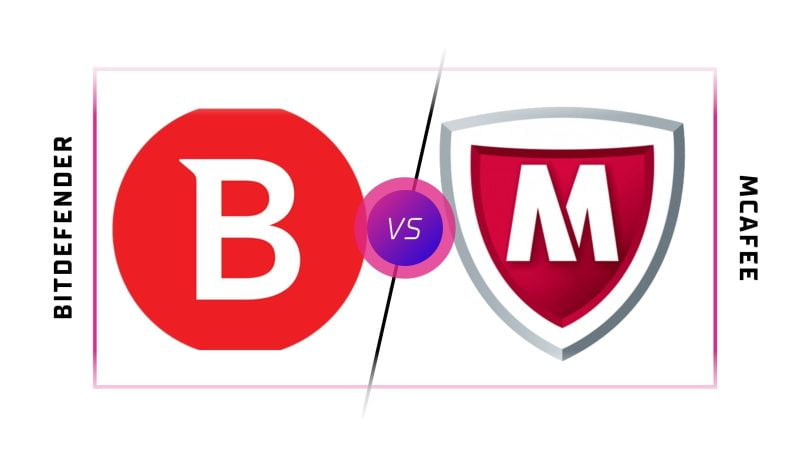 The number of new malwares is increasing geometrically and the cyberspace is very dangerous. It has been ravaged by millions of known and unknown threats. Is poses a serious threat to online users. These days, many vital files are saved in the computers, hence damage to computer files can affect the entire life of the individual.
To curb this trend, it is very Paramount for users to make use of strong and very efficient antivirus software to block and snuff out these rampaging dangers.

Bitdefender  antivirus and McAfee are two of the most powerful and efficient antivirus around. They occupy large percentage of the market. They are popular and powerful names.

The two softwares are specially designed and packaged to fight malwares and other related computer threats and viruses.

Many users are usually turned between the two tools. Questions usually arise as to which of the two is better.

To solve this recurrent question, we shall compare the two softwares to ascertain which of them is better.
We shall take into consideration, the following indicators – features, system protection, pricing and security, etc.

Bitdefender vs McAfees: Overview of comparison

McAfee is a brainchild of the Intel security systems. Intel is widely known for making system processors. McAfee is well designed and packaged to meet up with the recent upsurge of new and zero-day malware’s and viruses. It is managed by the McAfee systems. McAfee has two major varieties which are McAfee Virus scan and McAfee Enterprise. The Virus scan version of McAfee is made for use in homes and by small business organizations. The enterprise version is used for managing large enterprises. McAfee is available for use on who and other top operating system.
For windows users, McAfee is offered as virus scan plus. McAfee is in a strong collaboration with sky digital systems. This collaboration laves the way for users to to make use of the sky broadband connection.

McAfee offers massive and all-round protection for users when they surf the internet.

One of the highly distinguished features of McAfee is that users can permanently delete sensitive digital files from the system and also allows the scanning of files on-access. McAfee is very proactive. It blocks websites that are known to carry malware’s and dangerous viruses. It offers round the clock spyware and firewall protection. The firewall protection offered by McAfee is for both inbound and outbound protection. In addition to the aforementioned, McAfee has a site advisor. The site advisor analyses websites and files and send in the reports to the users, thereby determining whether the website is safe for surfing or not. The advisor is always on the lookout for rampaging risks such as phishing, malwares, viruses and several varieties of zero-day threats.

Bitdefender is a very unique antivirus software designed specially for prime focus on data protection. It is integrated with firewall and anti spyware abilities. Bitdefender is a wide known and rated antivirus software. It is highly simplified and quick. Bitdefender is a system speed booster. It raises the processing speeds of the computer via its adaptive scanning which monitors and correct all anomalies in connections such as Wi-Fi, etc.
The bitdefender antivirus is embedded some amazing but powerful features that amplifies the protection provided. The feature sieves both known and unknown malwares, phishing and ensures secure searches.

Users of Bitdefender can operate their online banking and shopping without any fear of being tracked. The identity and information about the user is protected for massive privacy. Doe your children have access to your computer? If so, then you can restrict and monitor their actions on the computer by making use of the parental control feature. This feature provides massive web-control for browsers.

Bitdefender offers real time protection for files. Bitdefender sets into work to protect files in real time immediately the screen is setup to real time. Copied, replaced and downloaded files are scanned inside out in real time.

Bitdefender makes use of the heuristic application to control and snuff out viruses. In this case, file monitoring and assessment is carried out while the files continue to run on the back ground. The heuristic approach is also applicable in the intruder detection feature. Bitdefender is highly proactive in nature. The B-have proactive feature allows it to detect and block malwares ahead of time. The downtime scanning is also another great feature. It ensures that scanning is done even when the system is not running in full swing. Other key features available in the Bitdefender software packages includes spam filter, social network security, Autopilot mode, http scanning, etc. All features are tailored towards ensuring that any iota of malicious files are identified and blocked.

Protection and cleaning up of the system is very pertinent. Tests shows that Bitdefender offers more in this aspect than McAfee. McAfee was successful in detecting 100% of threats but only blocked 95% of the threats. The cleaning up rate was very poor as the McAfee succeeded in cleaning up about 70% of the infections. Meanwhile, bitdefender was able to Cleanup 92% of the threats.

Bitdefender vs McAfee: Which Software is Less Expensive? 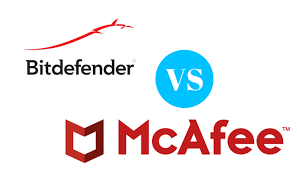 A head-to-head comparison of the two softwares shows that the two tools are great in blocking malicious files and even zero-day malwares.
In terms of features, Bitdefender is rated as the best. It enhances the system security by providing highly proactive tools than McAfee.