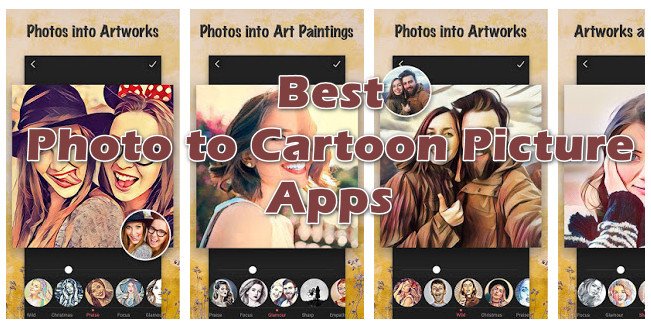 This page contains an awesome list of best cartoon picture apps that are capable of transforming your photos into cartoon images. I know you may have heard of apps that can carry out this function. Also, I have used some of them myself and found out that they really work to turn every single image to animated contents. However, I did more research to discover some of the best photos to cartoon picture apps and compiled them in this post for you. 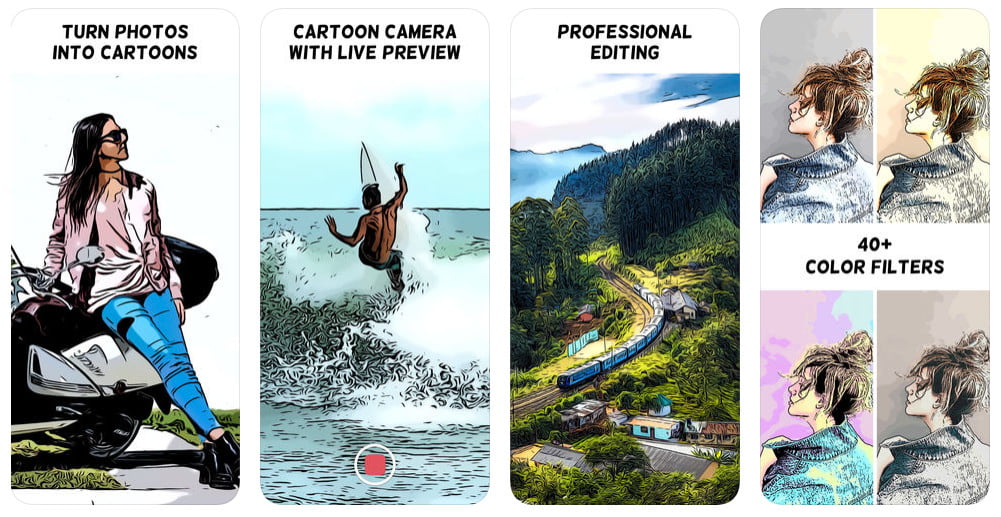 During this extensive research, I also discovered that you can create awesome cartoon photos every second of your life. With these apps’ in-built selfie camera, they automatically convert pictures instantly to cartoons. Awesome right!. Are you ready? Let us see the list quickly.

One of the top free photos to cartoon picture apps on the play store right now is cartoon yourself. With over 1 million downloads this app earns a spot on our list today. It is however splendid in its creation process and creates amazing cartoon pictures in seconds. It comes with sketch effects, painting, drawing, sketching and pencilling tools, with more features like a lomograph, graffiti spray and many more.

You can start creating your cartoon self from normal pictures on your device. Let nothing stop you, create and make awesome cartoon photos and even videos with this app. Also, it is exclusive to iOS users and has a very simple user interface. This helps with communication and artistic interaction. Don’t forget to use the simple share options to share your craft with the world on this app.

Sketch me like its name is another great app for creating cartoon photos in a few seconds. With this app, making and creating awesome photo sketches and animation is easy and convenient. You can also turn capture photos to animations and also draw uniquely on them if you want. I think this app is worth. Try it now.

This is another great free cartoon picture app for Android with more than 1 million downloads on the play store. This awesome app comes with a great cartoon camera, cartoon editor, photo editor, and cool and awesome filters to make that awesome cartoon photo you desire. Whether you want to snap with the cartoon camera or convert a normal photo to animation, this app has got you covered. You can make amazing animations of yourself, and share them on multiple online media with friends and family.

Unlike its other counterparts, this cartoon picture app is free and can make amazing animation figures with its large number of different cartoon effects. Also, it has more functions that you can also get form in-built real-time filters and apply them to your photos. It also contains a camera feature with a large number of functionalities like a focus, pinch, zoom, artistic effects, live filters and many more.

From an artistic point of view, this cool app offers you a great number of artistic and creative cartoon effects. Also, you can easily convert your photos and favourite images to cartoon animations just by a few clicks. Similarly, this app includes an in-built cartoon camera that can effectively change your image to cartoon animations directly from your smart screen. It is one of the best photos to cartoon picture apps with advanced picture editing tools that allows mobile users to create awesome cartoons in a few seconds.

More than 30 cartoon photo filters are available on this app, and with just a few easy clicks you can transform literally any type of photo to animations. It is actually one of the best photos to cartoon picture apps available on the Google PlayStore for mobile users. if you love converting pictures to a cartoon, Here is your answer convert in one easy click.

Get access to large amounts of filters for all animation features for your captured photographs. Also, you can easily create, edit and apply multiple cartoon effects on your photos. Furthermore, this app is free and available for all iOS devices. So, to download it, visit its website or directly download it from the iOS link provided for you here.

With more than 10 million downloads for creating cartoon pictures in a few seconds, this app literally ranks as one of the best cartoon picture apps on our list today. With no room for delay, this app easily converts photos to cartoons in seconds. Also, it has a large number of different filters for each cartoon effects your photo needs. Simple in design and easy to use, this app deserves to be in this list. Download it now.

This photo to cartoon app is a perfect description of an app that is simple and easy to use. Download and open this app, to use the cartoon creation tools in its user interface.  For instance, you can create awesome cartoon photos for social consumption. Try the cartoon effects available on this app like the quick conversion process. This app stands out as one of the best photos to cartoon picture apps for both Android and iOS users.