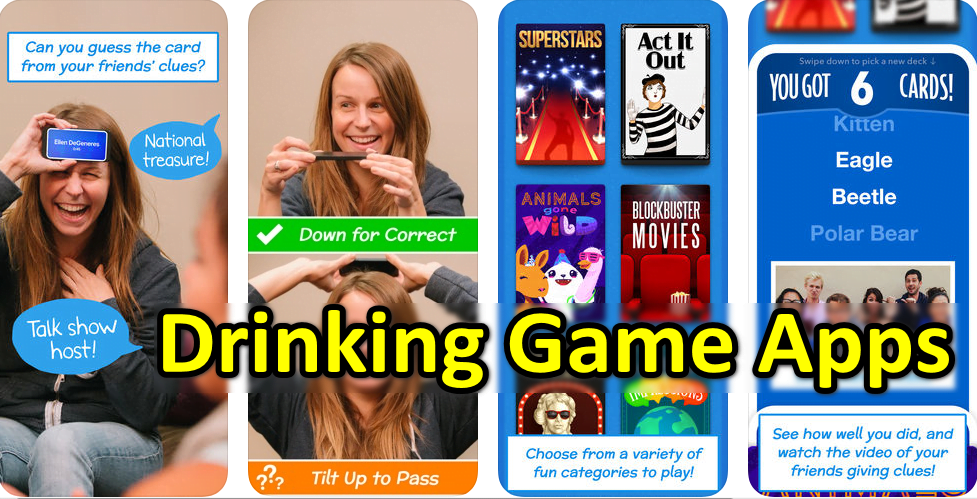 There are lots of times you just sit back and have a drink with people around you especially your friends. And most times after you talk with them you either do not know what else to talk about or you just get bored. There are numerous drinking games apps you can download on any of your devices to download, either your Android or iOS. So, below I will be listing the best drinking game apps you can download below with ease.

Heads Up allow you to play various games with your friends from guessing celebrity names to singing and guessing words and more. This app is very fun to use and it allows you to download and use with ease on your Android or iOS devices. It also has various themes you can use and add to your preference.

Seven Drinking Game is one other drinking game apps that are easy to use and you can download it for both Android and iOS devices. This app has different categories like giving you the ability to change languages if other people you are around cannot speak a certain language fluently. It has games to play like cards and dares to play with your friends or people around you.

This app like seven drinking game also has cards as one of the features to play with people around you want to play with while drinking. You can easily download this app like other apps on your Android and iOS devices conveniently. The main game on this app is the cards. It allows you to challenge your friends with its content like allowing you to draw things on it and make your friends guess what it is.

Drink or Doom is another app for drinking and playing games. You can get it for your Android and iOS devices with ease. This app allows you to get settings in the order of a comic book, allowing the maximum of at least 12 people to play this game. It also has music and other sounds that come along with graphics that are in high quality. This app is one of the apps convenient to use and easy to access without any problems allowing you to enjoy your use very smoothly with friends and more people around you.

iPuke is another very fun app to download for your Android and iOS devices that enables you to use and assess with ease. This app is very easy to use as it is part of other drinking game apps that comes with features like the card game also. It allows you to draw anything you want giving people a certain time for them to guess and decide what it was you drew. It also has other fun games you can use to play while having a good time drinking with people around you convenient for your use and fun also.

Picolo Drinking Game is another fun and interesting app to use for drinking while hanging out with your friends. It is very easy to use the app as it has features of its own from pyramid to beer pong to spin the bottle. This app is available for Android and iOS users, easy to play this game if you follow the instructions laid out for you to read very conveniently.

This drinking game app is quite popular among users of Android and iOS devices, as it is fun to use. The King’s Cup has a feature that allows you to choose the animation you want while you play the games on it, mainly for people that are not drinking or intend to drink. It is easy to use and go through things on the app as it allows you to do a lot and more, allowing you to edit the rules you want.

Circle of Death is another app that allows you to do a lot like the other apps in this article, its main game is also cards like most of the other apps. You can easily get this app on your Android or iOS, having more than 50 assortments of standard cards with different options. You can easily start a game and play with any of your friends and challenge them into playing with you as you guys have fun throughout the whole while you guys drink.

Related: 6 Ways To Spy Facebook Messages (Without Getting Caught)

Cultura Chupistica is part of other drinking game apps that allow you to do play on your Android or iOS devices. You can get features on this app for free meanwhile it has other features you can get on the premium version. This app allows you to do a lot of things but it is based on cultural things that give you acquirable knowledge on general things you did not know about.

Drink Cocktail Real Sim is another useable app for Android and iOS users, it is quite easy to use and comes with amazing features allowing you to play with your friends and people around you. One of the things it comes with is asking you questions and making you guess the answers making it fun and interesting for you. There is a lot more option for you to use on this app as it is also convenient to use.

These apps are quite interesting to use and they have their own features different from each other, they do not have any difficulties as they are easy to use and fun to play. The apps in this list article consist of the drinking game apps to use for playing while you have a few drinks with your friends.