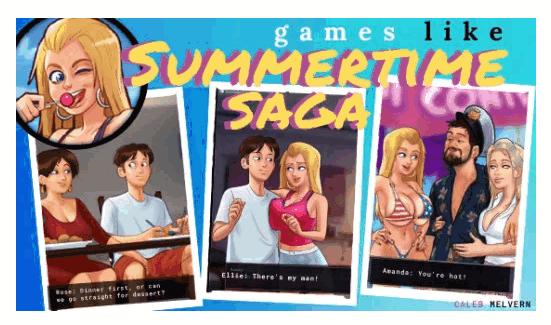 One of the most realistic dating games out there is Summertime Saga. Lots of people have played this game more than once and they still cannot get over its wonder. The good news is that you do not have to keep replaying Summertime. There are lots of alternatives out there that you can have fun with. Most people are fascinated with the adult adventure genre.

Summertime tells the story of the lead character trying to solve the mystery behind his father’s death while going to school and trying to have a normal dating life. Although most of these games like Summertime Saga have different storylines, they will also provide the same excitement and fun just as summertime. Continue reading as we give you the full details of all the games you can play instead of the Summertime Saga.

Ladykiller in a Bind

Snow Daze: The Music of Winter

This is one of the games like Summertime Saga. Even though it is almost the same match with Summertime Saga, it has a different storyline entirely. The game talks about the life of a boy, Jason, who is a musician. He was punished by being sent to the attic after he was caught spying on his sister in the bathroom. He has a mother named Noelle, a twin sister Sarah, a younger sister, and an older sister named Jane.

Music isn’t his only talent as he also knows how to control women’s minds. While stuck in the attic, he began to play audios with different messages which allow him to keep different women in a trance.  Once he keeps them in a trance, he has to overcome lots of barriers to make sure these women do whatever he wants. Whether he will succeed his challenge or not depends on you as a player.

Coming Out on Top

Also on the list of games like Summertime Saga is Coming Out on Top. This is a game based entirely on male interactions. It is based on the character of a gay man named Mark Mathews who is about to come out of the closet. Now, he is ready to hunt down the man of his dreams by living and making decisions based on the gamer’s will. There are multiple options you can choose with different results. As he struggles through life, he has to deal with lots of tribulations and challenges that come his way.

Another game like Summertime Saga is Sisterly Lust. This is a free game that focuses mainly on females. A father lost a custody battle in court to his wife. The main character was taken by the father and separated for years away from her mother and sister. She was deeply mistreated by her father and later reunited with her mother after the father meets his tragic end. After so many years separated from her sister, she now realizes they have become sexually appealing over the years. The lead character got attracted to her sisters with different thoughts ravaging in her head.

Now, she has to overcome the temptation of being attracted to her sisters. Your decision in the game will determine whether she will or will not overcome these temptations.

This is also a game just like Summertime Saga. It plays the role of Moriuji Haru who is a gamer. He was playing games on his computer when the characters in the game started coming to life in party clothes. They come to him to fight the Demon Lord for them, however, to remain in the world, they need to constantly go to bed with Haru.

He needs to interact with lots of characters in the game and keeps progressing. In addition to that, the lead character has lots of women at his disposal and have lots of temptations to do things he has never done. He continues living the life he wants and trying to search and fight the final enemy.

Crusoe had it Easy

This is a good replacement if you are after games like Summertime Saga. The lead character is trapped on an island with his perfect-looking cousin. The basic need is to not starve and that won’t prove to be a major problem as there are fishes and other food on the island. However, the big problem is his attraction to his cousin. The game follows the relationship between the two characters and how you play depending on whether they will follow their desires or not. It has seven different endings and the outcome depends on the players’ choices.

If you are searching for an adult game, then you will love this a lot. An elf alchemist travels down to Icesilia city to master her training as a mage but once she arrives, she gets to deal with more than just studying. She falls in love with both men and women in the city. The game is about the relationship and the magical world of the protagonist.

The game has a wonderful crafting and gives access to different conversations and conclusions. It also consists of two segments which are “Amber young” and “Amber Adult”. The latter talked about how she makes friends with lots of characters and the latter gives details on who she would like to go into relationships with.

Another game on the list of games like Summertime Saga is Lab Rats. If you are a science geek, then this is the appropriate choice for you. The story revolves around the chemical lab. The main character works on different chemical formulas to achieve a chemical romance. To proceed in this game, you need to increase your romance level by sleeping with other characters. Lab Rats entails the protagonist’s sexual encounters with different characters in the game.

Finally, we have given you eight wonderful games like Summertime Saga. You can read through and choose based on the storylines you can deal with. Furthermore, you can have lots of fun and excitement playing any game you prefer.