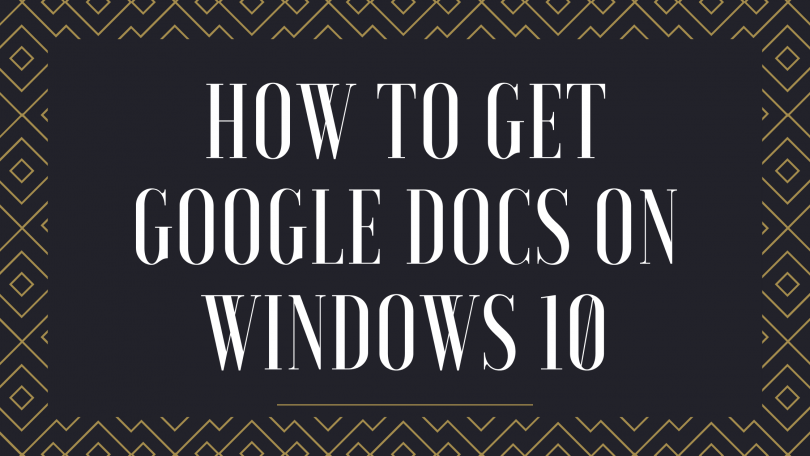 It might come as a surprise to you that Google Docs on Windows is a common thing now. That doesn’t excuse the complaints that the majority of Goggle Docs users have made in recent times when it comes to syncing their files on the popular suite on Windows. In this article, we will look at how you can have Google docs on Windows and open them for use as well. First, let’s familiarize ourselves with Google Docs.

What is Google Docs?

The name Google is definitely a household name now, and many people know what the extraordinary search engine stands for. Google docs is a web-based word processor that is available as part of the web-based software, Office Suite. It is available only through Google Drive services, and it is absolutely free. Google Slides, Google Sheets are also services available on Google drive apart from Google Docs. The web-based word processor is also available a mobile application for iOS, Windows, Android, Blackberry, and a desktop app on Google ChromeOS.

As we have established earlier, Google Drive services is the only avenue to get Google Docs. However, Windows 10 doesn’t have an in-built Google Drive support feature. It only makes sense to wonder why people are bent on using the Google product on Windows. Our answer to that puzzle lies in the features Google Docs boast of.

Of all the attributes that endear Google Docs on Windows, available through Google Drive to many users include;

Being a web-based application, users can open, edit, and revise their documents, make comments on them in real-time on Google Docs. That’s not all. Multiple users can make changes to documents at the same time. Their changes are tracked and saved automatically to Google’s servers. Users can revisit the changes that made and see the history of revisions. Color-code is attached to each user and is used to mark whatever change any user or editor does to a document.

Google allowed edits on Google Docs offline with this feature, even as its use increased. The only requirement was that the computer had a Goggle Chrome web browser. Editing suggestions are done on Google Docs, allowing users to suggest edit that can either be accepted or rejected. This was peculiar to Microsoft Word.

Google Docs on Windows has this feature to help users search the internet in-document results. Through machine learning, Explore uses information in a document to produce relevant search results.

Through the same machine learning that brought about Explore, Google Docs got the quick citation as footnotes feature.

Google made its product free despite the advanced features it boasts of. But, let’s be honest, who doesn’t like free things?

These features that we have highlighted will lead to our next point. Why do users of Google Docs on Windows think it’s complicated?

The latest version of Google Drive which will have the Google Docs on Windows is compatible with the latest versions of browsers like Chrome, Firefox, Internet Explorer 11, and Microsoft Edge (For Windows only) and Safari (For Mac only).

These browsers aren’t the only ones that are compatible with Google Drive, others will work with the app but they may not have all their features functioning.

It is also important to note that cookies and JavaScript should be on to successfully install Google Docs or you will not have access to the Google Docs on Windows.

With Computer Operating Systems, you can download Google Drive. It is compatible with Windows 7 and above (excluding Windows Server Editions).

While, for Mac, it is compatible with El Capitan 10.11 and above.

How to Get Google Docs on Windows.

Here is a step by step guide on how to get Google Docs on Windows. However, I assume that you already have a Google Drive account on your phone. If you don’t, you can as well open one before you commence.

To get Google Docs on Windows:

Tap the Run button and wait for the installation to complete.

Click on Get Started on the Welcome to Google Drive page

Continue to click next until you get to the final step.

Next, Click Done on step 4. At this point, a Google drive button which will allow you use Google Docs on Windows should have appeared at the taskbar.

Lastly, click on the button to see how much storage you have left and the last synced file. If you have enough storage, your Google Docs on Windows is good to go.

Finally, accessing your Google Docs on Windows isn’t as complicated as people make it out to be. Follow the steps above and you will be fine. Remember that you can sync your files for free on Google Drive. Also, you can view the changes in real-time. If there’s a file you need to work on at different times, drop into your Google Drive and it will be accessible both on your computer and your mobile.