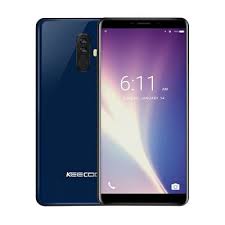 Keecoo P11 Pro is the bigger version of the Keecoo P11 that was released recently. This Pro variant comes with a dual camera, fingerprint sensor and an upgraded battery capacity and 4G LTE network. This mobile phone shares some features with the Keecoo P11 but the difference is clear as this one arrived with more premium design.

The KEECOO P11 Pro features metal chassis on the body with the panel rounded and the front screen bezel-less as it packs a large screen size of 6.0 inches. The resolution was also increased just like the screen to 1440 x 720 Pixels alongside about 268ppi density. On the side, it measures 8.4 mm in thickness while the weight is 190g which is a little bit heavier. The Cheechoo P11 Pro is available in Blue and Black colors.

The bigger screen is not the only difference between the two phones as the pro version has a dual snapper on the back that takes shots with 13MP + 0.3MP with dual LED flash that shoot 4K resolution images while the single snapper is also not left behind as it took it’s time to snap with 5MP.

The primary camera can record videos of 1080 pixels at 30 frames per second taking the images along the line at 4163 x 3122 Pixels dimensions. The 16GB is what you also get at the normal version while the phone support MicroSD card up to 64GB.

The MediaTek MT6737 chipset is what you get on this Keecoo P11 Pro and the Quad-Core processor reach its destination at a fast speed of 1.3GHz with 2GB of RAM that is powered by Android 7.0 Nougat. The ARM Mali-T720 MP2 graphics processor will increase your gaming experience and the navigation as well with the 550MHz clocking processor on board.

The battery is another area that is impressive as well. The Keecoo P11 Pro added 50mAh to the 3050mAh on the regular version making it 3100mAh which is also great.
You get a rear-mounted fingerprint scanner and a support of 4G LTE network as well for fast surfing or browsing.