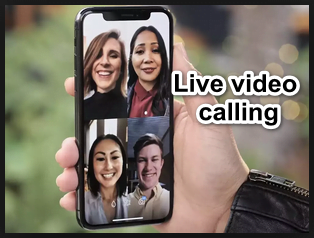 Many years ago people could not text each other only to make phone calls, talk less of the ability to communicate with each other through video calls. Now, there are numerous live video calling apps that one can use to communicate with other people. With giant tech companies creating efficient algorithms with high-speed internet connections that allow video calling to appear really good.

Now that we live in a world of doing almost everything with ease, there are assortments of selection a person can make while searching for the best live video calling apps.

What is the best live video calling app?

As there are some apps that create little and terrible features that would make you not want to use them ever again. So below I will be listing the top apps you can use for Android and iOS.

Skype is the first app one should consider for download. This app is easy to use for both Android and iOS users. It has amazing features apart from video calling, it gives you access to communicate with up to 25 people on a single video call. You can use it to send messages, emojis, stickers, even voice messages. Skype has a lot of people using it so it is possible may have about it before.

This app is very popular among the live video call apps that are available today. With wide-range users on both Android and iOS, it has a lot of unique and new features other apps do not possess. Allowing you to connect with people from a very far distance this app can take up to 9 people for video calls. WeChat is amazing and efficient app to use. You can also text people and share emojis and GIFs.

This is another you can get for free when you download on either Android or iOS. It has a lot of improvements allowing you to send images and videos while and making free live video calls. This app encrypts the communication you make with people making it easy for you to use. It also permits making you text people you cannot video-call with.

This app comes originally from Google so you would know it is definitely free for you to download on Android and iOS. You can easily connect with friends and family but you would need to have a Gmail account to access this app. This app does not highlight the totality of its features on HD video quality but it has cool features of its own like animated GIFs, sending videos and images and more.

Whatsapp Messenger as a lot of people know is a very popular app having a wide range of more than a billion users just like Skype. This is one of the best live video calling apps around the world, owned by Facebook and it being available for Android and iOS to easily use and download. This app has a lot of features but one that is different from others, it allows you to chat with people while on a video or audio call.

This is another free live video call app that lets you encrypt your data information you have with users. IMO is also available for the use of both Android and iOS, it lets you video call multiple people. It also includes features of sending stickers to your friends and family.

JusTalk is not as popular in this article for live video chat apps as the other listed apps, but that does not defer to the fact that it has features of its own. This app does not let you chat or send GIFs to your friends as its main focus is live video calling. It has a cool feature like allowing record your video call with people you call with, download this app on Android and iOS.

Unlike JusTalk, this app is also very popular among certain people across the internet. Of course, it lets video call and also lets you chat with people. This app also has a feature that all the other apps in this article do not. It lets you video call with almost 200 people at a time. It also allows you to send messages, stickers and more. A platform that is easy to download on Android and iOS.

Tango is also a popular live video call app in this article. Allowing you to send messages, stickers, images and more with an amazing feature that lets you go Live on video and allows you to play games while on a call with someone. Very easy to use and it has a random group chat where you can meet new people. It is easy to download on Android and iOS.

This is another platform owned and created by Google for live video calling apps. It is accessible on Android and iOS, you would need your mobile number to get into this app to create an account. It is very easy and simple to use and does similar things to the other mentioned apps.

We live in a vast increasing technological world that a lot of people could not get access to many many years ago. Live video calling apps are one of the fast-growing functions created to technology today. As it grows, people grow with it. This app consists of the top apps you could use for video calling in this modern day for both Android and iOS users.