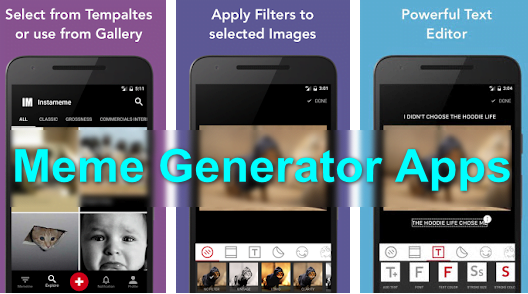 This post talks about memes creator app. If you use social media, you may already know what meme is or you may have heard about it countless times without knowing what it means. This article will give you the information about a meme. Memes are funny images you create in reply to someone either out of courtesy, in a joke or when you just wish to make fun.

Anyone anywhere can create a meme as long as they have an Android or iOS device. You can do it with your phone easily. However, if you do not know how to create a meme, we shall list the top 10 meme creator apps for Android and iOS devices here.

GIPHY is a famous app for making memes, used by a lot of people. This app sits proudly on top of this list of meme generator apps. Also, Giphy makes it easy for you to make and post memes on social media. This app is unique for allowing you to create an account for new users. In addition, it has an outstanding amount of categories you can select from. For example, you can pick either, movies, music, people’s reactions on interviews, TV and more. It is available for both Android or iOS devices. Try it today.

Mematic is another amazing top app that allows to you either make a meme or rate the app. Also, you can learn about the app on the main page. In addition, it allows you to make memes images, videos and more. This app has another amazing feature that makes it part of this list of memes creator app. The feature is, user capability to add little and simple texts to their memes after making them. Mematic is easy to use and available for Android and iOS devices.

Memedroid is an amazing app that has a similar feature to Mematic. With this app, you can add little texts to your memes which makes them findable across the world. Also, it is easy to access on either Android or iOS devices. Though this app is easy to use, it is not free. You must pay to use it.

This app comes with a different feature as it is preloaded with different images, and allows you to convert them into memes on your Android or iOS.  Also, you can use any selected image and turn it into a meme. Unfortunately, it does not support the adding of texts like Memedroid and Mematic. However, you can add images and text bubbles to your meme and save it on your phone.

This is part of other amazing memes creator app that comes with a lot of memes automatically. This app allows you to make your own memes from images included in your gallery. It has features for adding texts, emojis, and troll faces. Similarly, it allows you to do a lot of the things that you want with different features. You can use the app for both your Android and iOS.

Thug Life Photo Maker is another popular app that allows you to create memes you want with your specific preferences on your Android and iOS devices. Also, the app lets you give your meme any size you want. You can also use filters with a wide range of selections. In addition, you can use any type of image to make a meme on the app. With all these functions, you can see why it is one of the top meme generator apps.

As the name implies, this is another amazing app that gives you varieties of options. The top feature you can access on this app is that it allows you to set and design the image of anyone’s face into a meme. It is available on your Android and iOS.This app is easy to use and lets you save your work after making your meme.

Straight Outta Meme Maker is another very popular app that lets you create and edit the way you want your meme to be. This app lets you set your font to a very large text in the number of ways you like. This app is available on Android and iOS. platforms for you to download.

This is another popular app that lets you do much and unlike some that you can get only on premium, this app is easy to get. Also, you can use for free on either your Android or iOS devices. You do not need to create an account on the app before you can start using it. This app is easy to use and comes with assortments of features and images.

Simple Meme Creator is a popular app for making a meme. It is the last in the list of the best meme generator apps that you to use on your Android or iOS. This app gives you a meme maker that you can customize. You can use the maker easily to add texts on the images of your memes, style and put color on them too.

There are a lot of apps in the world you can download to create any kind of meme you want. However, the apps in this post are 10 of the best memes creator app you can find on the Internet. Finally, they will satisfy you because they have incredible features. Also, they are available for your Android and iOS devices.