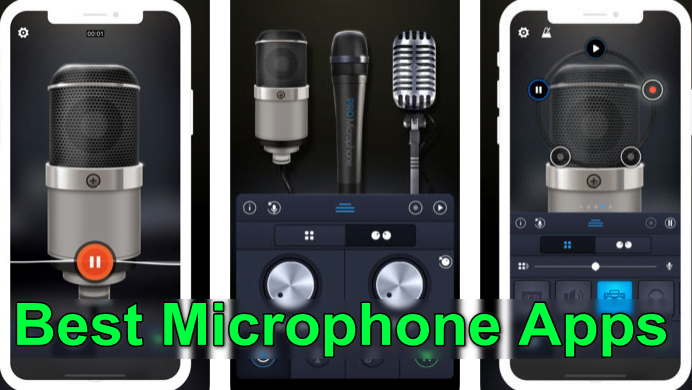 A microphone app is not new to you at all.  Also, we all know that you use a Microphone for occasions and events. However, application developers created a way for you to use it on your smartphone. If you want a microphone of your own, or wish to learn how you can use it with your smartphone read on. In this post, I will be listing the best 10 microphone apps that you can download on Android or iOS devices.

Live Microphone is a fantastic app you can download on your Android device. The app is very easy and convenient to use. If you cannot afford to buy a microphone just download this app. It has a number of features that can enable you to sound like a real microphone would. Also, it comes with features that a normal microphone does not have. These features include enabling you to record, voice chat and even recognize your voice.

EZ Mic is one of the other microphone apps that you can use easily on your Android or iOS devices. This app comes with its own features also allowing you to use any number of voice effects laid out on it. You can even use the app to play pranks on any of your friends,  colleagues, boss or in a professional environment.

PRO Microphone is another app that allows you to use your voice the way you want on your Android or iOS device. The app was created to make your voice louder when you talk or sing with it. Also, it has 3 types of microphones on the interface. One mic comes as a studio mic, another as a dynamic mic and the third as a condenser mic. All these mics come with their own assorted features that you can easily use when you select any of them.

MegaPhone is another app that is likely to be one of your favorites to download on your devices. Also, this app is easy to get on Android and iOS devices. The app is simple to use with an amazing interface. However, unlike most other apps it comes in both paid and free versions. Both versions have their own assorted features that you can use as you like. Finally, you can use them to turn your phone into a microphone or a megaphone.

WO MI is another app and part of the best microphone apps that you can be sure to get with satisfying ease. The app, however, will make use of internet connection to work. Also, it uses your Smartphone to allow you to capture your voice data appropriately. The app like Megaphone also has a paid version. In addition, one of the advantages of the paid version is the easy removal of ads. You can download on your Android or iOS devices if you prefer to use this app.

Karaoke Microphone is another enabling app that is good and you can use easily on your devices. From its name, the app allows you to learn how to sing songs easily without help from anyone. As part of the best microphone apps, it has an in-built speaker for its users. In addition, you can also download the app like other apps on your Android devices. Hence, if you like singing, this is the best app for it as it allows you to record yourself singing, as you use it with the microphone which makes your voice loud.

EZ Voice is one of the best microphone apps you can use easily and in any way you want. Also, it is downloadable for Android and iOS users. It allows you to use it with the ton of effects that comes along with it. The app allows you to record your voice as you either practice or sing professionally with it.  You may even send the recording to people you want.

This is another amazing app you would love to use and then download on your iOS devices. it enables you to use your microphone for numerous amounts of things. Like singing, recording, and a lot more other things on your devices. Also, the app like most apps here comes in both a paid and free version. Try it today.

Wireless Mic is a good app to use and download also. Unlike the previously listed app, it is free to use. It comes with a lot of features. Also, it has a lot of studio effects you can use while you sing with it. Finally, it is easy and can be fun to use and you can download it for your Android devices.

Microphone by Wonder Grace is another fantastic and suitable app you can download on your Android devices. it has a different class of its own features that most other apps listed here, do not have. Features like an amplifier, a mono-stereo among other features. Also, the app has varieties of them which include widget support and equalizer adjustments, and more.