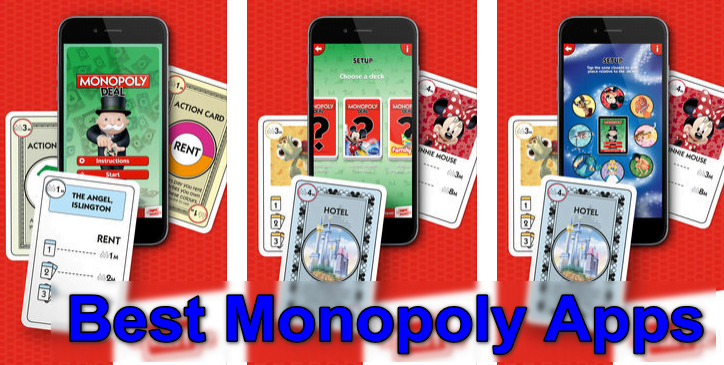 If you a lover of games, be it board games, card games, or even video games and you just like playing games, read this article. There are numerous games out there today but they are not easy to buy. That is why developers have come to our aid by creating those games as apps. so that we can download them from mobile stores, for iOS and Android and play them on our devices. In this article, you have the best monopoly apps that you download and play with your friends and family.

This is the first app on this article that you can download and play on either your Android or iOS devices. The app is easy and fun to play as it is just like a monopoly game in reality. Here, you deal with cards and other things like getting properties. One feature this app offers is that you can play the game offline without an internet connection.

Europoly is another app you can get on your devices either Android or iOS. It is also fun and enjoyable as it gives you a lot you can play with. The game on the app can be played among 2 and highest of 4 players. It also has 9 separate avatars that you can use on the app.

Shop, Play, Win is another app you can download on your iOS devices. The app is very easy to use as most other apps. It is part of the best monopoly apps. This app is like other apps providing you with basic things you will need to play the game. The app requires you to create an account that is free to open.

MONOPOLY Bingo is another app that you can download and is easy to get on your Android and iOS devices. You can do the basic things on this app, like building a house, a hotel, and a lot more other things. The app is one of the best bingo apps out there today with a lot of users.

Board Kings is a good app that you can use. Also, it has a quality interface that gives you the best playing experience. The app is available for Android and iOS users. It is very good to use and it provides you different features you can use to play the game. Like allowing you edit your images and more.

This app is a very popular app among users of Android and iOS devices spread across the world. The app lets you play the game the way you want easily and conveniently. You have to play and complete a task using tools for building and more. The more you play the game, the more chances you have of winning and getting tokens and cards for slot machines among other amazing things.

Rento is another fantastic app and it is part of the best monopoly apps for a good reason. It has an amazing interface you can use and, it provides you with a multiplayer version on it. Also, it allows you to play with people anywhere you like on your  Android or iOS devices. It has qualities similar to a normal game. You will enjoy and love it as you play it.

Monopoly Junior is another app you can use with ease on your Android or iOS devices respectively. The app is good to use serving you with an amazing interface like a lot of the other best monopoly apps. Also, this app is specifically for kids to play the game too. Although it has the same settings and works as a normal game would, it was created for children.

LandLord is another fantastic app you can download very easily. The app also has an amazing interface you can use to your liking. The game like the name specifies is on properties. To play it,  you buy and sell properties. It is available for download on Android devices.

Arctopia is the last of the best monopoly app in the article. This app is based on you creating and building a monopoly coffee empire. Also, you must get profits from sales to build your empire. You will enjoy the app. In addition, as you strategize, you would improve your business enterprise and know more. Get it on your Android or iOS device.

Monopoly has a lot of players all over the world who love to play it at any time they want. That is why this article was created, to enable you to choose any of the games from the best monopoly apps listed here. Get yours now.