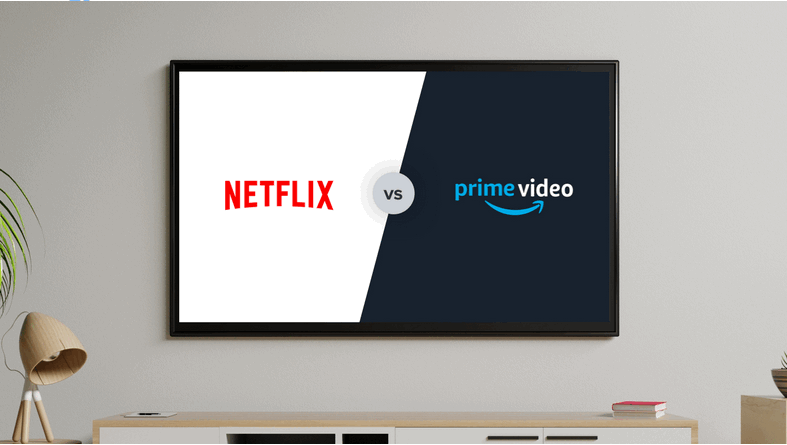 There are now a number of growing platforms that offer streaming services. Most of the contents they offer are entertainment of different sorts. Streaming services are now swiftly overtaking cable TV in terms of viewership and subscription plan. The major competition is between Netflix vs Amazon Prime.

Evidently, the two online streaming platforms are two of the most dominant. This is because their functionalities are alike. They offer TV shows and movies with just a click. As a result of this, you can easily watch them during your free time.

Also, both platforms offer 4K HDR content and offline viewing. This makes one choosing between them quite tasking. However, in terms of on-demand streaming video services, Netflix is miles ahead.

Both jostle for viewership numbers and bills from customers’ wallets. However, they don’t compare with each other in various aspects such as content selection, pricing, and other areas. In light of this, we, therefore, make the task of you choosing between the two a bit easier. Read on to get a detailed break down of their offers, contents and qualities. 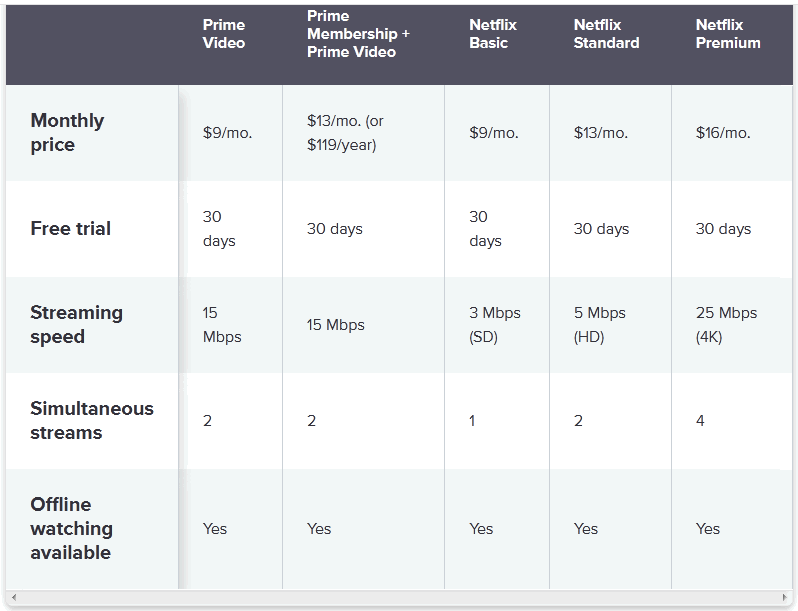 As shown in the table above, Netflix offers a three-tier service. They are the Standard Definition, High Definition and the 4K Ultra HD. More so, they are further categorized into the Basic ($9 monthly), Standard ($13 monthly), and Premium ($16 monthly). Amazon, on the other hand, offers a $119 annual Amazon Prime membership. This gives you ad-free access to its entire Video catalog, Amazon music services along with some shopping-related benefits.

Additionally, the video quality on Netflix improves while the number of devices that can be streamed simultaneously increases the more you pay. The Basic offers a single stream and standard definition of (480p). The Standard offers a second simultaneous stream, both of which are available in HD (up to 1080p). The Premium allows for four devices to watch at a time. Contents can be streamed in up to 4K Ultra HD with HDR, as well as Dolby Atmos. This is depending on when or if the show or movie is available in these formats.

More so, the annual membership affords you access to the highest quality stream that your TV or streaming device and internet connection can support. This is including the 4K Ultra HD with HDR, as well as Dolby Atmos but just like Netflix, these vary by movie or TV show. Subscribers can stream up to three titles at a go, but they can only stream the same title on two devices at a time.

The Netflix vs Amazon Prime competition in this instance is a bit in favour of Netflix because they have grown to be a trusted source for movies and TV shows in the media industry where viewers give attention to those movies and shows just for being on the service.

Although Amazon has about five times the movie titles of Netflix, Netflix has more IMDb titles on its lists of 250 TV shows and movies which is a culmination of user ratings and popularity.

Furthermore, Netflix’s cabinet consist of a host of licensed Hollywood movies and TV shows, documentaries, and specials with original productions such as The Witcher, The Umbrella Academy, amongst others which have increased viewers’ thirst for Netflix.

For a while now, Netflix has been reducing its catalog of movies while increasing its TV shows cabinet. Disappointingly though, Netflix is losing some of its popular movies because the Disney streaming service was recently launched. This loss may increase soon if the Marvel, Disney and Star Wars franchise installments become Disney exclusives.

Notably, a December 2018 report by Reelgood revealed Amazon Prime’s larger total library of movies and TV shows with more than 12,000 ahead of both Netflix and Hulu. Although Amazon’s Hollywood films are comprised of much older contents such as Sherlock Holmes, Iron Man 2 and Top Gun amongst many poor movie titles, they have their own original content such as Mrs. Maisel, Fleabag, Man in the High Castle, etc. 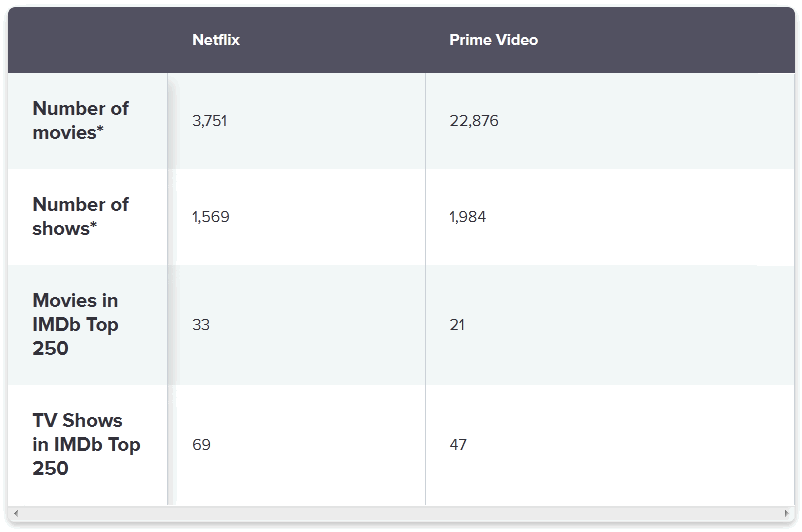 With your Netflix account, there are audio descriptions for the viewing impaired, subtitle options, and multiple profiles. Meanwhile, with the Amazon Prime Video account, there is access to parental controls, customizable captions, and offline viewing.

More so, on Netflix, you can control what you see by keeping a watchlist. This ensures currency with your favorite movie titles. Additionally, Netflix provides notifications according to your movie interests. However, on Amazon Prime, its channels afford you the opportunity to create channels from other services like HBO or Showtime and enclose them all in just one app.

Netflix’s interface and intuitive recommendation tool create ease of usage and navigation. A monthly subscriber can add titles to his “My List” intended to be viewed later. In contrast, though, Amazon Prime Video has good video quality and doesn’t charge more money for tittles available for streaming in up to 4K with HDR and Dolby Atmos.

Netflix has a very consistent interface with just slight changes from one device to another. Its video and audio quality are so great that they match your internet connection speed unless you set the video quality to lower quality to save your data.

Both platforms give you the ability to download titles to a mobile device to be watched later. This makes for an ideal situation where there is no internet access.

Furthermore, the two streaming services provide various choices for download because this certainly helps sacrifice resolution and bitrate for smaller files. This helps to save storage space. Hence, in this instance, it’s a tie between Netflix and Amazon Prime.

Finally, it is now your choice to make from any of the prices you find friendly with your pocket. Therefore, choose from whichever content gingers your interest between the two platforms. Whether it’s Netflix or Amazon Prime, be sure to get the utmost satisfaction that both can offer while you help intensify the already stiff competition.