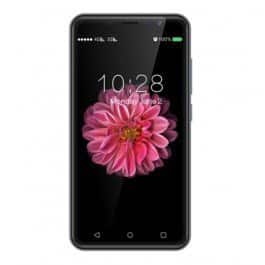 Nomi i5001 Evo M3 is another low-level entry smartphone from a Chinese OEM called Nomi. This phone features a MediaTek chipset that comes with a quad-core and 1GB of RAM. The overall performance will not grace speed and fast but for a novice phone user this phone will meet up his demands. Let’s see some of it’s Features and specs.

The Nomi i5001 Evo M3 sports a 5.0 inches display with a screen resolution of 854 x 480 Pixels and IPS touchscreen technology. On the front it’s has a top bezel where the camera, earpiece and other sensor are located and on the panel, it sports an LED flasher, a camera, and the Nomi logo. On the screen, it has a 2.5D curved glass and the entire body is built with plastic and it arrives in Blue and Gray color.

The sensor that the camera houses is not that impressive, The Nomi i5001 Evo M3 has 5-Megapixels on the back that features Autofocus, Face detection, Geotagging, ISO settings, Panorama, Scene mode and Self-timer with an LED flash. On the front, it offers 0.3 Megapixel without an LED flash and it has an internal memory of 8GB that users can always expend up to 64GB using a micro SD card.

The Nomi i5001 Evo M3 is powered by Android 7.0 Nougat operating system with a removable battery capacity of 2000mAh. It has MediaTek MT6580M processor with a Quad-Core 1.3GHz Max and a RAM of 1GB to improve the performance. On the inside, it packs micro USB, support dual micro SIM and it has wifi, wifi hotspot for wireless connection.