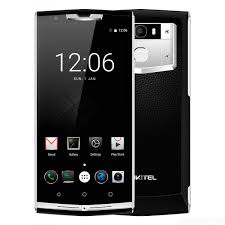 Oukitel K10000 Mix is the looks alike of the Oukitel K10000. A smartphone with a massive battery capacity that looks so tough and rugged enough to survive a drop.
Hitting against the wall is out of the box as this model feature a plastic on part of the body.

On the design, judging by the outlook, the Oukitel K10000 Mix is indeed rugged as the smartphone is designed and built with the combination of metals, leather, and plastic. The frame is where you will find the metal coating and the panel is crafted with leather featuring some plastic on the side.

It has a big display of 5.5 inches with 720 x 1280 Pixels resolution which might not be that sharp in displaying images or text. The 261ppi density shows that this Ouikel K10000 mix is the lower version of the K10000 series. On the front display is 16:9 Aspect Ratio with a Corning Gorilla Glass protecting it from any damage.

The 13 Megapixels is normal and cool as it snaps with an LED flash and still records 1080 video at 30 seconds per frame. In addition to this, the 5-megapixels on the front shooter is also what you get on the regular version so it’s saved to say that the Oukitel K1000 Mix does not disappoint in the camera aspects. The inbuilt storage is reduced to 16GB thankfully it still supports microSD card up to 128GB.

The downgraded processor of MediaTek MT6737V along with the 2GB of RAM can still give something considerable as the phone run on a Quad-Core 1.25GHz ARM Cortex-A53 while the ARM Mali-T720 MP1 will increase the graphics as it clock on 600MHz processor with 1 core You get an inbuilt battery of 10000mAh that actually live up to its name along with fast charging technology that will boost the charging speed. The fingerprint scanner is located in the right place as you can easily reach it and the 4G network will increase the browsing speed.

The Official price of Oukitel 10000 Mix is not yet available but the phone is expected to sell at a price of 50,000 Naira to 80,000 Naira in Nigeria depending on your location in the country.