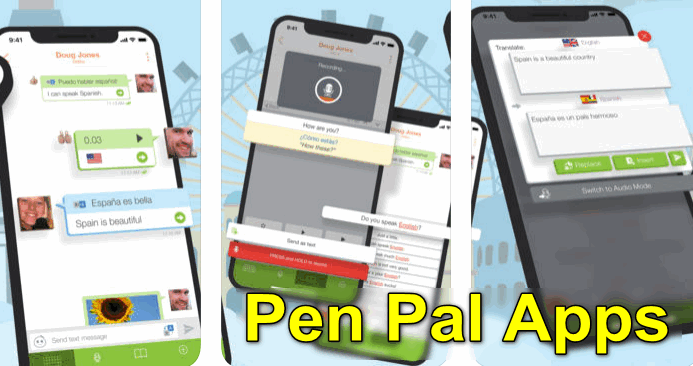 A very long time ago, people developed a friendship with others in different parts of the world through a pen pal. The platform back then allowed people to build a relationship with people far away. This was how most friendships were developed, but it only had one issue. In that platform, when you send a message to a person, replying was not as easy as sending. So, in the modern age, pen pal apps were created that enables you to develop friendship and communicate with your friends fast.

So, in this article, is a list of 10 best pen pal apps that you can download and use for your Android and iOS devices. Let us analyze the list now.

HelloTalk is the first app I will be presenting to you in this article. The app is one of the best pen pal apps that you can use easily on your Android or iOS devices. The app is amazing to use and it gives you numerous features. One, in particular, is allowing you to learn foreign languages and allow you to choose a language and to practice through audio message.

This is another app that you can use easily on your devices. This app allows you to communicate with people all around you. It also enables you to use it as a social networking app to connect with people all around the world and be friends with them. The app is available for you to download on Android and iOS.

Bottled is another app that will be part of this list. As it is also a good app to use providing you with features. The app is free and secure. It allows you to chat and talk to strangers you want to speak to in private. In addition, it also allows you to send messages anonymously to anyone in the world on your Android or iOS devices.

Another fantastic app that you can use that provides you with a lot is Replika. This app allows you to do most things appropriately like most of the other apps in this article do. It allows you to chat easily with anyone you want and explore your personality. You can also do all these easily from the convenience of your Android or iOS device.

The app is very good to use as it allows you to connect and meet people you choose to be friends with. It also allows you to do this from the comfort of your Android or iOS devices. In addition, it lets you write a letter and share details that you want the person to know about you. Furthermore, it allows you to send it to them wherever they are in the world.

This app is one of the best pen pal apps that you should also consider to download. The app allows you to do a lot with its features like the other apps listed in this article. However, it has two versions that you can use quite easily. It has a free version and a purchasable one. The app like no other app in this article, also allows you to learn languages the way you want on your Android and iOS devices.

This is a very good app that you can get for Android and iOS devices. Also, the app is very convenient to use as it gives you features like other apps. This app gives you one feature that is quite different from the others. That is to allow you to video chat with the people that you want to talk to very easily.

This app gives you a lot also like the other apps in this article. It is part of the best pen pal apps that you should try and get on your devices. The app spreads across a lot of regions in the world. Allowing you to make friends from more than 200 countries easily. It also allows you to do other things on it like finding travel plans and even creating a travel plan. In addition, it lets you get advice from people around the world easily on either your Android or iOS device.

The last of the pen pal apps that you can use in this article is Yubo. This is a very amazing app to also download for your Android and iOS devices. You can also use it as a social networking app to contact people you do not know before in other to be friends with them.

Penpal apps were made to help you develop friendship and communicate with your friends fast. Secondly, you easily get any of these apps for free on your devices. Finally, they the best pen pal apps that you can get on the internet today. Get one now.