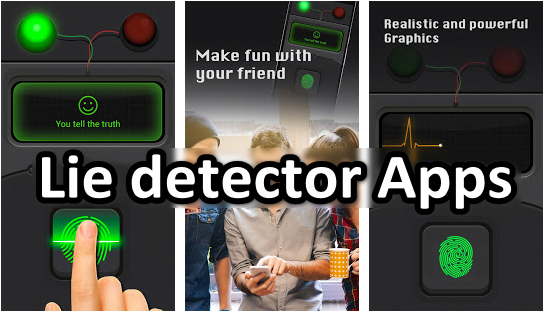 Most people are always caught in the lies other people tell and they do not like it. This is where a lie detector app comes in. Also, you may know that someone is telling a lie because they are habitual liars but, cannot prove it.

Fret no more, there might just be a way to catch these liars and have fun at the same time. Technology has made apps that can detect a lie. So, you can now make your friends tell the truth by force just by downloading and using a real lie detector app that works.

Furthermore, you can play pranks on these individuals and find out what they are thinking, to catch them in their lie. This post will give a list of 10 best lie detector apps which are available for your Android or iOS devices.

Lie Detector Prank, is one prank app that let you have fun with people around you, your friends and family on your Android devices. This app gives you many secret options that allow you to evade any detection.
Similarly, it allows you to know the correct answer to a question.

This app is like any other app on this list. It gives you a verdict of the question you ask someone whether it is true or false. Lie detector simulator has a three-option interface allowing you to know the details of an answer. The first option is if it is a “Lie”. The second option is if it the “Truth”. The third option is “Maybe”. Furthermore, you can get this app easily on your Android and iOS devices. Thereafter, you can start using the app to find out the lies people tell you quickly. You will have a lot of fun with this app. Finally, it is easy to use.

Lie Detector Test Prank, is another amazing app that is quite popular among users of lie detector apps. You can get it on your Android devices and it is easy to use. Furthermore, to use the Lie detector prank test, ask your friend to place any of their fingers on the scanner and then ask him or her questions. Tell the person to give you a yes or no response. The app is fun to use and easy to play a prank on others. When you use the app on them, it will make it seem like they did not say or do something they just did.

This is another app easy to use and easy to get for any of your devices either for Android or iOS. Lie Detector Face Test Prank app has a feature different from the other apps in this article. This app scans your face after you ask a question and detects if the reply you gave is true or false. You can easily use this app to play a prank on your friends.

Truth and Lie Detector Scanner Test is one of the other lie detector apps that lets you use your finger or fingers to detect when a person is telling a lie. You can get it easily for your Smartphone devices either for Android or iOS. It is fun to use and convenient for playing pranks on your friends and family.

Lie Detector Free is another app that lets you detect someone’s reply to you, to confirm whether it is true or false after asking them something. It is easy to get on Android or iOS. The app allows you prank people around you with ease. Like the Truth and Lie Detector Scanner Test App, this app also comes with a fingerprint scanner, to detect whether what you said is true or false.

This app is one app that allows you to use it easily with its content, it does not require any difficulties while using it. You can get it for your iOS devices, very easy to use for pranks. Like other lie detector apps, this app allows you to scan the fingerprint of the person you want to play a prank on and get a true or false answer from.

Verity is a very good and amazing app to use to also detect when a person is lying. This app is available for iOS users. Also, it has its own features for detecting whether a person’s answer is true or not, by analyzing their face. In addition, it has a feature that allows you to take a picture of a person with its 3D camera and to detect if the person’s reply was true or false.

BioDigital Lie Detector is another amazing app you can use without any difficulties like most other apps in this article. You can use this app on your iOS devices to record a person’s voice to detect if they are telling a lie. The app uses an algorithm integrated into its features to detect lies. Also, it is very easy and convenient to use.

Lie Detector, is easy to use and accessible on both Android and iOS devices. Also, it is like the other apps that you would need individuals fingerprint, to scan whether they are telling a lie or not. This app is very convenient to use and also allows you to play a prank on people around you.

In this article, we gave you the best lie detector apps that you can use to find out when a person is telling a lie, and also to play a prank on them. They are easy to use and accessible for download for Android and iOS devices.

Hope you can use these apps to have fun and to catch your friends who lie to you. Share this article on social media.