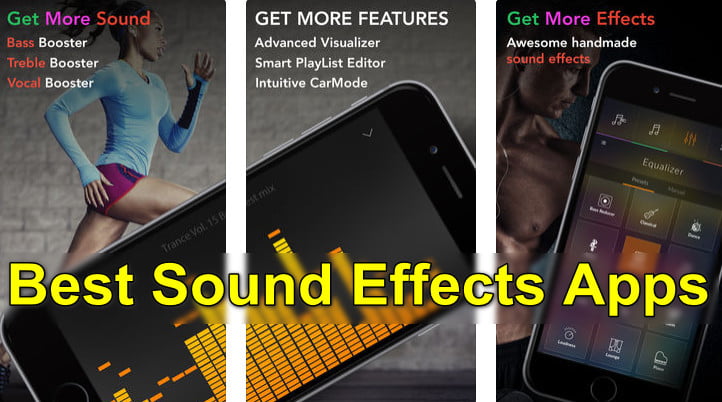 As you do your daily activities, your body and mind are attracted to sounds around you. Even if you are not paying attention to it, there are sounds around you at all times of the day. You also know that many individuals like sounds of music which is a source of entertainment and joy to them. However, some like listening to music and the sounds within, to inspire them to make their own sounds out of curiosity. If you would love to create your own sound effects and find out how it sounds, read on. In this article, I will list the 10 best sound effects app you can download on your device to carry out this task.

100 Button Sounds Effects is a widely used app for creating sound effects you like. Apart from being available for Android and iOS users, this app comes with different sound features. Features that include allowing you to make funny, annoying pranks on people if you wish. It also has several sounds you can select and use as a ringtone.

Equalizer is an amazing app that allows you to do a lot like the other apps that are listed in this article. It has a variety of sounds you can choose from plus a high volume. Furthermore, it has a feature in its settings that allow you to set the sounds the way you like it. It is also easy to use and download on your Android or iOS devices.

This is another app that allows you to create sounds with its amazing interface. As one of the best sound effect apps, voice changer app gives you simple functions you can use easily. For example, after you record your sounds on the app, it automatically saves to your phone’s storage. In addition, it seeks your permission to set the sound as your ringtone on either your Android or iOS.

This tool, like the name implies, allows you to create and add changes to the sounds you make. This app is available for Android and iOS users. Also, it has its own numerous features that make it part of the best sound effect apps. This app has a vast amount of different sounds such as different animal sounds and lots more. Also, the app gives you the ability to edit them to your liking.

This is another app part of the best sound effect apps that you can use with ease and convenience on either your Android or iOS devices. The app like other apps allows you to create any kind of sound you want and, edit it with its numerous features and effects. Sound Effects also has a feature that enables you to add different color themes while you edit your sounds.

This particular application is one of the best sound effect apps that have different effects for different sounds that you can use. There are more than 40 scary sounds on this app that you can add to your voice. You will need to be cautious because the sounds on this app are likely awful sounds. Nevertheless, if you are the type that like this sort of things, then this app is perfect for you as it is available on your Android and iOS devices.

This mobile app is one of the popular apps that contain features of cartoon sounds like the name implies. The app contains features you will find fun and entertaining while you play it. It is available for Android and iOS users. Also, you save your edited sounds directly to your files.

Animal Sounds is also an amazing app to use on your Android or iOS devices.  This app gives you more than 100 different animal sound effects you can use. You can use any of the edited sounds as a ringtone or alarm tone, the app is very easy and convenient to use.

Cat Sounds, is one funny and popular app you can download for sound effects. The app is based on the sounds of cats. The app contains more than 40 sound effects produced by cats. You can even easily make any of the sounds of the cats as your ringtone or alarm tone without editing it. You can get it on your Android and iOS device.

Gun Shot Sound is another amazing app you can use to create and edit your sounds on your Android or iOS devices. The app consists of various gunshot sounds from the shortest to the loudest bang. Giving you different gunshot sounds that you can edit. Also, like other apps, you can easily set any of the sounds as a ringtone or alarm tone.

Sound surrounds us all the time whether we like it or not. Most of us are not even aware of these sounds. However, some people that enjoy music also like to experiment with sounds of their own. Hence, they will need to have the tools to create these sounds easily. That is why this article has the best sound effects apps that would enable you to create great sounds. Get your own app today.