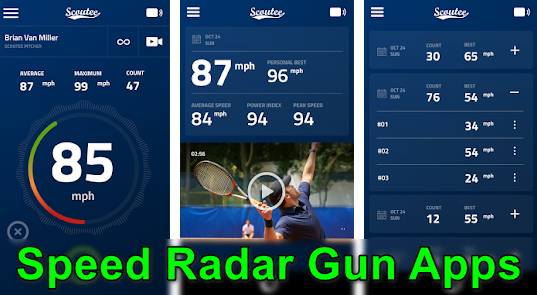 These days advanced technology helps you to do a lot of things with ease. One of those things is the ability to measure the speed of any moving object with the use of your smart devices. As of date, Apps have been created that enable you to measure and know the speed of things right on your smart devices. So below, I will give you the best speed radar Gun apps that you can use on your Android or iOS devices. Also, these apps allow you to measure the velocity of moving objects using camera perspectives and to share your results.

Athla Velocity is the first app in this article of the best speed radar gun apps that you can use on your iOS devices. The app allows you to work hands-free and you don’t need to tap on the screen and ask someone to hold your device. All you need to do is to start the app and then put your device 20 feet away to use it. While you are using it, the app will show you speed on the screen of your phone. This app also does other things like measuring the speed for baseball, softball, tennis and other things. And allows you to share your results with people you want to, like your coach and your friends.

Another app you can use that was created for people who love baseball, is the baseball radar gun high heat app. The app can measure the pitch speed of the baseball player and also his opposing pitcher. The app is simple to use and you only need to press a  button at the starting point and at the end. After you are done, the app will show you an accurate measurement on the screen of your iOS device.

This is another app that is part of the speed radar gun apps that you can use conveniently on your Android or iOS devices. Also, to use the app, direct the camera of your phone to the street perpendicularly. After that, press the calibrate button and then start measuring the speed following the car. The app also allows you to measure the speed of moving objects with the help of smart devices.

Another one of the speed radar gun apps on this list that you would like to use is speed gun created by Arius. The app will also measure the velocity of moving objects like other apps, with the help of camera perspectives. The app displays the units in the mileage per hour. And it could also tell you the number of kilometers per hour. Also, when you use it on your Android, it shows the units of distance in feet or meters.

This is also a fantastic app that you can get that will turn your smartphone into a radar gun. Also, it records speed and videos and will analyze it to give you the results. The app measures the speed like the other apps in this article on your Android. And it also records a video of your performance with the speed data overlay.

This is another speed radar gun apps in our list that you can use in most situations when velocity measurement is required on your Android. The app turns your device into a speed gun that measures the vehicle speed. But, you will need to select the measuring spot next to the road and point your camera at the approaching vehicle.

Scoutee baseball radar gun app will turn your mobile into a radar gun. Also, it will record speed and videos, analyze them to give you the results. The app can measure the pitch speed of the baseball player and also his opposing pitcher. While using the app on your Android device, it measures the speed and records a video of your performance with the speed data overlay.

This app created by Smart Tools Company measures the velocity of moving objects with the help of camera perspectives. And it is part of the speed radar gun apps. The app measures the speed of any moving object just the way the other apps work. It is easy to use. But you need to input the shortest distance to the target. And it allows you to measure the current speed of movement on foot and when you are on a vehicle using your Android devices.

Speed camera radar is also part of the speed radar gun apps for Android brought to you by Road Soft. This app has features of its own like providing you with a free GPS radar detector. And you can use the app to detect the hazards on the road like speed bumps and bad roads. Also, is a speed camera.

This is the last app in this article of the best speed radar gun apps. This app is great for speed detection in baseball, tennis, cricket, and golf. Also, you can use the app for football, volleyball, hockey, and basketball on your Android device.