Telescopes were created a very long time ago and they were used by people to view things and objects from a very far distance. It can be very hard sometimes to locate telescope sometimes if you need to get one. Some people have to order from other countries before they can get their hands on one. Well, if you can not go through all that process, you are in luck because developers have created apps that can allow you to use telescopes as a feature. Created for both Android and iOS devices, you can use these apps anytime you want. So below I will be listing the best telescope apps for you to download anytime you want. 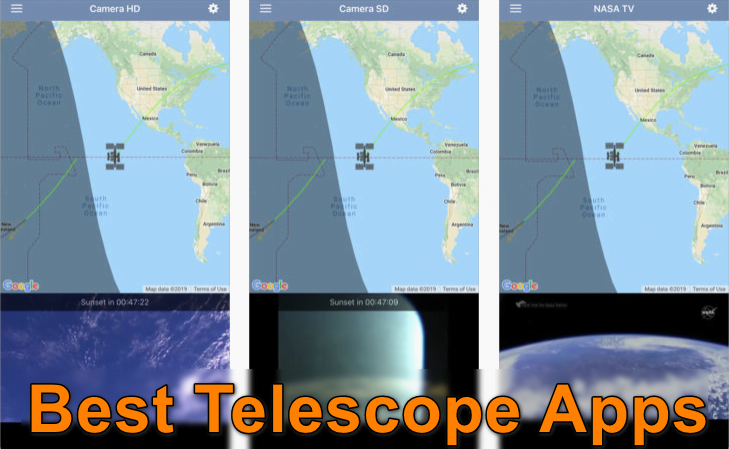 Scope View is the first app that I will be providing for you to download in this article. The app does a lot as it allows do a lot on it like giving you a photo editor feature. It also allows you to use it for aerial photography and a lot more on your Android or iOS devices.

Star Walk 2 is another fantastic app that you can use conveniently on your devices, the app also comes with its own features. Developed by Vito Technology, you can do a lot like allowing to explore the night sky with your device. The app also has a GPS location enabling it to determine the location of the stars and planet and other things in space. You can use it very conveniently on your Android or iOS devices.

STAR-Space Telescope is another app that you can use quite easily on your devices also. The app was developed by space telescope science institute, as it also allows you to do what the other apps provide. One feature the app provides you with is to allow you to learn about telescopes and view them in 3D. Easily downlaod the app on either of your devices for Android or iOS.

Star Chart is one other fantastic app that you can use on your Android and iOS devices as well.  The app provides the same features as most of the rest of the other apps in this article as well. One feature it does not share is the paid version it comes in as well as a free version. Alongside that, it also uses GPS location on your devices.

Polar Scope Align is a very good app for you to also downlaod on your devices as part of the best telescope apps for you to use. The app also does a lot like calculating the position of the Polaris or o Octantis in your polar scope reticle for the location you are in. The app like most also comes as a free app as it also comes as a purchasable app. Download the app on your Android or iOS devices.

SkyView is also part of the best telescope apps you can get on your Android or iOS devices. The app was developed by Terminal Eleven enabling you to use as a free version and also a purchasable one. The app allows you to identify stars, constellations and more.

WiFiCamera is another app that you can use conveniently on your devices. The app allows you to also do a lot as it provides you with features you can use. The app’s product is used as an astronomical telescope but through the wifi transmission. You can also easily get the app on your Android or iOS devices.

Skysafari also joins the best telescope apps you can download and use on your Android and iOS devices. The app also provides you with features like allowing you to hold your device to the sky letting you know the location of planets. It also allows you to know the location of constellations and satellites.

ISS Detector is the last app I will be presenting to you on this article, the app also comes with its own features. The app is one of the best satellite tracker app that you can use quite well, using to know when and where the international space station or iridium flares. One feature it has is to provide you with an alert letting you know when there is a passing. Get the app on your Android or iOS devices.

If getting a telescope is becoming a pain in the ass for you to acquire, you do not have to stress anymore. As you can download any of the apps in this article, they provide you with what a telescope does and more. As they are the best telescope apps you can use on either your Android or iOS devices.