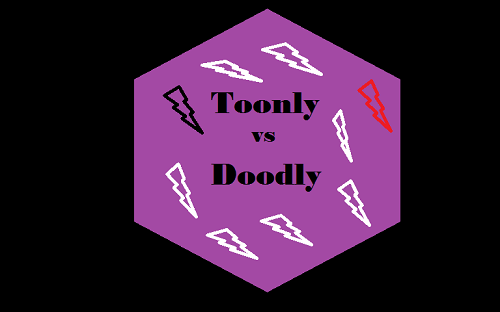 Toonly and Doodly are two of the best software for creating explainer videos. You must have at one point or the other sat to watch a television program and got a rude surprise, a rude one mostly. In front of you, a gangly two-dimensional character performs an action while a voice describes his action or why it is doing so. You see its action and you smile. The anger that erupted when you were rudely interrupted now gone. That is the power of audio-visual communication.

This article focuses on how two of the best tools in creating these interesting explainer videos and sometimes, commercials compare to each other. They are Toonly and Doodly; befitting names, right?

Since the use of animations in business commercials began, the revolution in this part of the graphic design world got outstanding. There are many rapid improvements such that cartoons looked more and more like humans. However, the process of creating an animation character can be very tasking. This gave rise to more simple forms of animation. Doodly is used to create whiteboard explainer videos that we now enjoy. Some of these videos were made using either of the two tools we have our focus on.

In this bout involving Toonly and Doodly, let us see how they compare on the basis of Pricing and Plans, Features, Ease of Use and Overall Effectiveness.

Toonly and Doodly Pricing and Plans

Toonly has two plans. The first is the Standard Plan ($39 per month), and the other is the Enterprise Plan ($69 per month). Users have numerous benefits under both plans but as expected, there are benefits under Enterprise Plan that are unavailable to the Standard Plan. Basic features such as Character Creation, Character animation, Prop Images, and Backgrounds are available on both plans. Other features the plans have are Premade Scenes, Scene Transitions, Text Animation, and Background audios. Furthermore, users of either plan have access to Premium support, can create unlimited videos, use the tool on multiple computers, and invite people to Toonly Facebook Group. However, access to Toonly Club where members can get new characters and props monthly is available to Enterprise Plan members only.

Doodly has two plans as well. The plans have the same names as that of its opponent. Its Standard Plan costs $20 per month and its Enterprise Plan is $40 per month. Benefits of Doodly enjoyed by all its users are Royalty-free audio tracks, Doodle characters, Doodle images, and Support. Other benefits include Multiple PCs Support, Unlimited Video Creation, and even Private Facebook  Group membership.

Both Toonly and Doodly restrict their Standard plan users from having new characters and images like the Enterprise users do. It is obviously a tie in that aspect. But Doodly is one-up here as it allows Standard Plan users access to its Group membership. Toonly, on the other hand, combined that group membership with access to new characters and props. That means the standard plan users lose in two ways.

Doodly clearly wins this round.

The features in the first point above are not peculiar to just one of these two software. Both possess what is needed to make a professional whiteboard explainer video. However, there are some glaring differences in some aspects. Doodly has other boards such as chalkboard, glass board, green board, and custom. Toonly has only one board, and that is the whiteboard.

Also, Doodly offers high video quality in resolutions that range from 360p to 1080p high definition. Toonly in its case offers video resolution as high as 4K. That makes it even with Doodle in this Toonly and Doodly square up.

Both Toonly and Doodly are quite easy to use, on their website, users will find useful video tutorials on how to use the software and navigate the interface without difficulty.

When a user runs into a confusing situation, which is very rare, the tutorials are always there to set them on the right path.

The presence of abundant background sound and eye-catching characters has made this possible. When the desired quality of audio or image is unavailable, users can always import their preferences. Although Doodly has the standard black and white colors for its characters, it is not available for Standard Plan subscribers. However, Toonly users can use colored characters.

Whatever your purpose is for creating an animated explainer video, you will find adequate tools in Toonly and Doodly. This software will help you make animated commercials. Your choice on which to choose between Toonly and Doodly should be decided by which of the two meets your need.