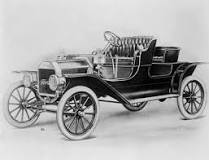 Henry Ford is the founder of Ford Motor Company. When ford started making cars was around the early 90s. Ford Motor Company was incorporated on June 16, 1903. The company is in charge of selling automobiles and commercial vehicles. They sell their product under the Ford brand and most luxury cars are sold under the Lincoln brand.

When Did Ford Start Making Cars?

However, Ford started making cars on October 1, 1908. The first car that was made at that time was Model T Ford. The Model T Ford was completed at the company’s Piquette Avenue plant in Detroit. Before it was invented, cars were a luxury item. Luxury item in the sense that it was very expensive and not everyone could afford it. They were only two hundred thousand (200,000) cars on the road at that time.

Although the Model T Ford was not so cheap, it was fairly expensive. The cheapest initial cost was $825, or exactly $18,000 in today’s dollar. This car was built for ordinary people to easily drive around every day. The car is made of a four-cylinder engine, 22-horsepower, heat-treated steel.

The quality that the car has that made it standout than its predecessors was the fact that the car is stronger and it weighs lesser. It weighed just 1,200 pounds. Its other quality includes speed, it can go as fast as 40 miles per hour and it equally run on gasoline or hemp-based fuel.

Moreover, as the years go by the interest in many America increases. Many Americans were now tired of just an affordable car, they wanted style, speed and luxury. The Model T Ford was only available in one style and just one colour.

Why is Ford car important to history?

Ford car is important to history base on the following reasons listed below;

Looking at the Model T Ford you will think that the car is not durable. That is, it cannot withstand the test of time. But you are very wrong. When Ford started making cars he makes sure that his cars were highly durable. Not only were they durable, but they were also affordable and fast. And the motor car indeed was for the masses.

Read this also: What Is Uber?