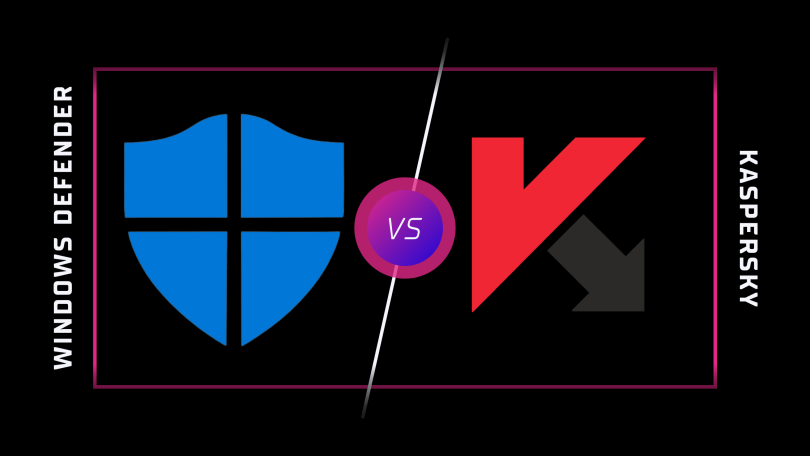 Windows defender and kaspersky are two of the most regularly used system protection softwares. They are both very efficient in shielding the computer from malware and all Forms of online threats. The two software are great anti viruses in their own unique ways but which of them is better? This big question is usually a big debate and calls for indepth details about these two amazing softwares.
In this post, we shall highlight the features, compare and contrast the two softwares.

Windows defender vs Kaspersky: Which is better?

In windows 7 computers, Windows defender is a supportive anti virus software that is created to supplement for the main antivirus system in the computer. Though it offers it’s own protection. The windows defender is designed to work specifically on the windows operating systems.

The functionality of the windows defender was upgraded in the windows 8 and windows 10 operating system and they could function effectively as a stand-alone antivirus software capable of protecting and shielding the system against malwares. It is totally free since it comes along side the operating system.

On the other hand, kaspersky is a full fleshed antivirus software designed to offer real time protection for the computer system against all forms of known and unknown threats. Kaspersky has both the free and the paid version. The paid version is embedded with highly systematic functionalities whuch can not be found in the free versions. Kaspersky is not an in-built computer shielding system, but rather is the brain child of a different company. 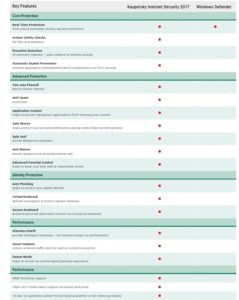 Windows defender is designed as a substitute antivirus software in windows computers. It was made to cover-up as a system shield for computers without without antivirus softwares. As a result of this, the windows defender does not have many features compared to other paid and premium system softwares like Kaspersky. That not withstanding, Windows defender has several features capable enough to offer real time protection for systems especially in windows 8 and windows 10.
Kaspersky is a 3rd party software system. It has an abundance of system shielding and protection features both in the free and in the paid versions.

1. Windows defender allows various types of scanning in the computer. It has the real scan protection, the offline scanning as well as the scheduled scanning which can all be used to detect and flush malwares from the computer.

2. Windows defender provides a regular update of the health status of the system. Some system drawbacks such as outdated drivers and softwares are usually updated on the system desktop for the user to be notified and provide solutions. Windows defender does this only at the shallow ends and does not detect serious computer security threats.

Kaspersky offers real time protection for new, unknown, emerging viruses. This is also applicable for spywares and phishing attacks. If offers an instant safety checks for files. This same safety check is applicable in websites. It is very proactive in detecting threats most especially in detecting unknown threats and malwares. This is in addition to the roll back of harmful activities. Kaspersky ensures that the vulnerabilities of bad applications does not affect the performance of the system. It offers an automatic exploit prevention. Hence, the system security is not compromised.

Windows defender is encompassed with the firewall protection for maximum protection against malware when browsing the internet. It has the network feature which ashields the system against threatening ma!wares and spyware’s when connected to a home network. Windows defender is embedded with the smart screen tool which detects harmful websites and pops up a notification whenever a dangerous software is about to be installed in the computer.

This feature is only functional in windows 10 and on the Microsoft edge browser only. The parental control feature is available only on the Microsoft edge browser i.e for users of windows 10. It allows the parents to have control over the activities of their kids on the internet. They can restrict the websites they surf, their duration of browsing as well ad the type of files that they can have access to.

On the other hand, Kaspersky offers a two-way firewall protection which is very functional in blocking hacking attacks. The bad guys are always roaming the internet for lope holes, but Kaspersky firewall protection is strong enough to shield such attacks. If blocks spamming via the antispam protection feature. The application control feature guards the system against vulnerabilities offered by dangerous features while the ‘safe mkney’ feature secures the personal data of the user and protects against online fraud during online financial transactions. The identity protector safeguards the identity and personal information of the user.

It has the ‘safe surf’ feature that blocks dangerous websites from harming the computer while the anti banner is designed to block annoying and unusual banner ads when surfing websites. Crowning all these, Kaspersky has the advanced parental control feature which tracks the online and offline activities of kids on the system and send reports to the parents.

The windows defender system shield is completely free of charge. It is embedded by Microsoft in the windows operating system for optimal system system. All the features are offered for free. On the other hand, Kaspersky is a third-party computer software with free, premium and paid versions. The Kaspersky free version is usable on unlimited number of PCs and has many amazing features. It also has the paid version with the prices ranging from $29.99 per year to $49.99 per year for the total security versions.

The internet is broad and is becoming more complicated as the days go by. Hence, It is very pertinent for for users to have an antivirus system that offers real time protection offline and online against both known and unknown threats.

Based on our analysis, windows defender is good but its functionalities are some how limited. Kaspersky stands tall. It is far more equipped with core and advanced system protection features.