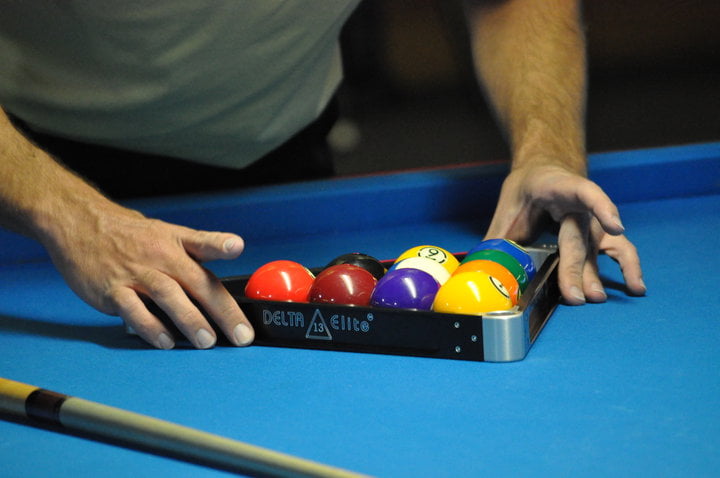 8-ball pool or sometimes known as ‘solid and stripes’ is a special kind of billiards game. It is played using a set of 16 billiards balls and cue sticks on a pool table having six pockets. The billiards balls are divided into two main categories namely object balls and the cue ball. In the 8-ball pool, there are seven solid-colored balls and seven striped balls. The objective of the game is to legally pocket the 8-ball after legally pocketing all the object balls of the chosen set of balls by the player. There are some sets of rules used in playing 8-ball pool. Here’s a step-by-step guide to playing an 8-ball pool.

The 8-ball pool is a billiards game that uses a set of 15 numbered balls, one white-colored cue ball, and one black-colored “8” ball. The solid-colored balls are numbered from 1 to 7 while the balls numbered 9 to 15 are striped. One player aims to knock out the striped balls and the other tries to pocket the solid colored balls. A player has to pocket all the other balls of his set before aiming for the “8” ball. The player who knocks the “8” ball first wins the game.

A head spot is located at a one-fourth distance away from the length of the pool table. You will see a triangle or a circular dot that represents the head spot. The head spot is the place where you will position the white-colored cue ball to start the game. A head string is a line that passes through the head spot.

Place the triangular pool rack on the pool table. Now arrange the balls numbered from 1 to 15 inside the rack. The rack must be placed on the end of the table opposite to the head spot, with one of the corners of the triangle pointed towards the break. The rack should be centered in line with the foot string of the pool table.

Once you are about to begin the game, remove the triangular rack so that the balls remain on the table.

There are some unique terms used extremely often while playing the 8-ball pool. These terms may not be understood by a novice. Therefore, it is wise to learn some frequently used words from the pool. Some of them are:

Keep the cue ball at the head spot on the pool table. Using the cue stick, hit the cue ball while aiming at the triangular rack of object balls. The cue ball must be hit with precision and a considerable amount of force in order to prevent the event of a foul. To avoid a foul, the player must knock any of the object balls into the pocket or drive at least four balls to contact the rail of the pool table. This is called a legal break shot.

If the shooting player scratches or fouls, his opponent has the choice of playing on the table as it is or re-rack the object balls. The balls remain pocketed if the player scratches on a legal break shot. If the player knocks any numbered ball out of the pool table, it is considered a foul. The upcoming player can either play on the table as it is or choose to take the cue ball in his hand and break again.

When the table is open and one of the players legally knocks a numbered ball into the pocket, then the player can choose that group of balls for the remaining game. For example, if you break and pocket a solid ball, then you can choose to knock out the solid balls.

You can continue shooting your chosen group of balls until you scratch or miss the pocket. For instance, if you have successfully pocketed the solid ‘2’ ball, then you can shoot again. If you pocket any solid ball a second time, you can shoot again until you fail. In case you miss a shot, it automatically becomes your opponent’s turn to start shooting.

You can choose to aim for combination shots. You can knock a pair of object balls at the same time. But the pair must not contain the “8” ball unless it is the last object ball for the player on the table.

While playing an official game of pool, you might need to call your shot. This means you must announce the ball and the pocket you are aiming for. For example, if you are going to knock the 5-ball in the corner pocket, then you must say, “5-ball, corner pocket”. However, you may skip this step if you are playing casual pool with friends or acquaintances.

You are allowed to pocket the 8-ball only when you have legally pocketed all the other balls of your set. Once you are done with knocking the balls of your set, announce the pocket in which you are going to knock the 8-ball. You must take a careful look around the pool table to choose the pocket in which it will be the easiest to knock out the 8-ball. Call your shot and hit the ball with the cue stick. If you are the first one to pocket the 8-ball, you win the game.

A player is said to be the winner of the game when he has legally pocketed the 8-ball after pocketing all the object balls of his chosen set. But a player can lose the game if he commits any of the following mistakes.